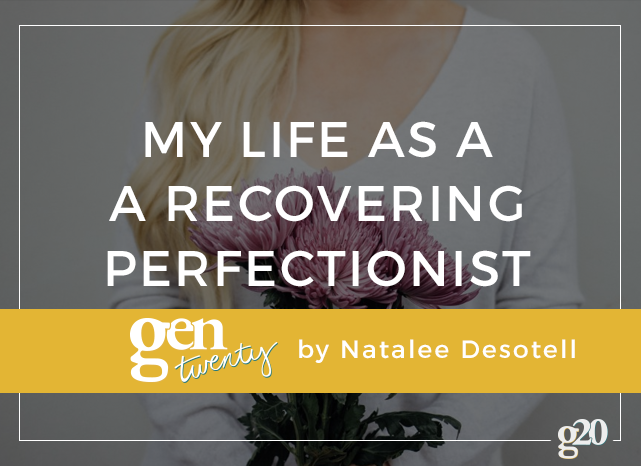 Do you read your emails 6 or 7 times before sending them? Are you worried about applying to your dream school because you think the admissions committee might actually let out a belly-laugh at how stupid your application is? Do you dwell on dumb mistakes you made back in 2007? Yes to all? Then you might be dealing with an unhealthy level of perfectionism. Congrats, you are part of the approximately 30 percent of the general population who deals with these irrational and destructive thoughts.

There are different levels of perfectionism, and I won’t pretend to know all the nuances of each type. Some people only have a tiny degree of perfectionism and others are totally debilitated by it. I’m somewhere in the middle, as I suspect you and most others are. If you have a very serious problem, seeking medical help might be the best place to start.

I’ve heard people joke that during an interview, you should say you’re a perfectionist when asked about your weaknesses because it’s supposedly a strength disguised as a weakness. Clever in theory, but it misses the reality that perfectionism isn’t really a strength in any way. Anyone who is plagued by perfectionism knows that to be true.

The infamous Vanilla Ice unintentionally summed up perfectionism with the line “anything less than the best is a felony.” This was actually something I said to myself all through my undergraduate years, and even considered having it tattooed on my forearm (yikes, bullet dodged there).

At its core, perfectionism is an enduring fear of failure that can be so severe, you’re afraid to take risks or try new things.

It also means that you can’t see yourself as a success; anytime you achieve one goal, you decide that goal wasn’t good enough. You’re constantly putting yourself down, worrying about how other people see you, and assuming that people won’t like you if you make a single mistake. Is that the kind of employee a hiring manager wants to welcome on the team? Probably not. So it’s beyond me why anyone thinks perfectionism isn’t truly a weakness.

READ MORE  How To Write a Follow-Up Email or Handwritten Note After a Networking Event (+ FREE templates!)

I consider myself something of a recovering perfectionist.

I’ve been wanting to get rid of this unhealthy thinking pattern for awhile, but just in the past few months is when I really had to get over it. I’m back in school after two years in the workforce, and let’s just say there won’t be a lot of vowels on my transcript this semester. To keep from going berserk, I had to adopt a healthier way of processing my failures. I can’t say I’m completely reformed, though. I have already erased this article 2 times to start over, and maybe I’ll do it again. But I suppose being imperfect at letting go of perfectionism is some version of poetic justice.

When you’re trying to rid yourself of the nettlesome perfectionism bug, a good place to start is to develop some healthy mantras.

Personally, I love a good quote. Just like I had some unhealthy mantras before (a la Vanilla Ice), now I have an arsenal of mantras to help me put things into perspective when something goes wrong. I write them among the doodles in my notebooks, save them as my phone and computer backgrounds, and say them in my head from time to time.

Some of my favorites are:

“Anyone who has never made a mistake has never tried anything new.”
― Albert Einstein

“The greatest mistake you can make in life is to be continually fearing you will make one.”
― Elbert Hubbard

A simpler one that I adopted from a friend and say frequently is “moving on.” I brush the mistake or failure off my shoulders and say “it’s okay, moving on”. It’s such a refreshing way to deal with mistakes and it feels way better than dwelling on it. Somehow, just saying these simple words works wonders.

Getting over perfectionism also takes a lot of practice and uncomfortable moments. It seems silly now, but I have deleted social media accounts several times just because I suddenly feel like everything I posted on them is stupid.

Something that helped me a lot was writing for GenTwenty. Putting myself and my thoughts out here for all to see is hard, but it’s also healing. I’ve written some silly articles, some with spelling or grammatical mistakes, and some that I may not agree with anymore. Many of my articles are imperfect, and you know what? Nothing bad has happened. My friends still like me, I’ve still gotten hired for jobs, and life goes on.

Perfectionism, in my opinion, seems to be a lot more about other people than it is about yourself. Mine was mostly focused around others’ opinions: my family, friends, and even strangers. I was so afraid of showing my imperfections that I even pushed some people away for fear that they would eventually hate me anyway.

If you need another reason to rethink your perfectionism, consider that a disproportionate number of suicidal people are described as “perfectionists,” which makes sense if you think about how perfectionists feel like it’s not worth doing at all it you can’t do it perfectly. Perfectionists also tend to have more health issues including depression, stress, anxiety, drug addiction, migraines, and even irritable bowel syndrome. As a result, perfectionists tend to take more time off from work and school, which means that the perfectionism is kind of backfiring anyway.

If you’re a perfectionist and you want to learn to take yourself a little less seriously, I suggest you internalize some good quotes, practice being imperfect, laugh at yourself, and try something that you think you may fail at. When all is said and done, you’ll realize that nothing truly awful happens if you let your guard down. Just say “whatever, moving on,” and get on with your imperfect life.

Previous Post: « 7 Practical Ways to Be a Smarter Employee
Next Post: 5 Ways to Take Your Career to the Next Level »

6 Tips For Being Present in Every Conversation

Are you engaging with the people right in front of you?