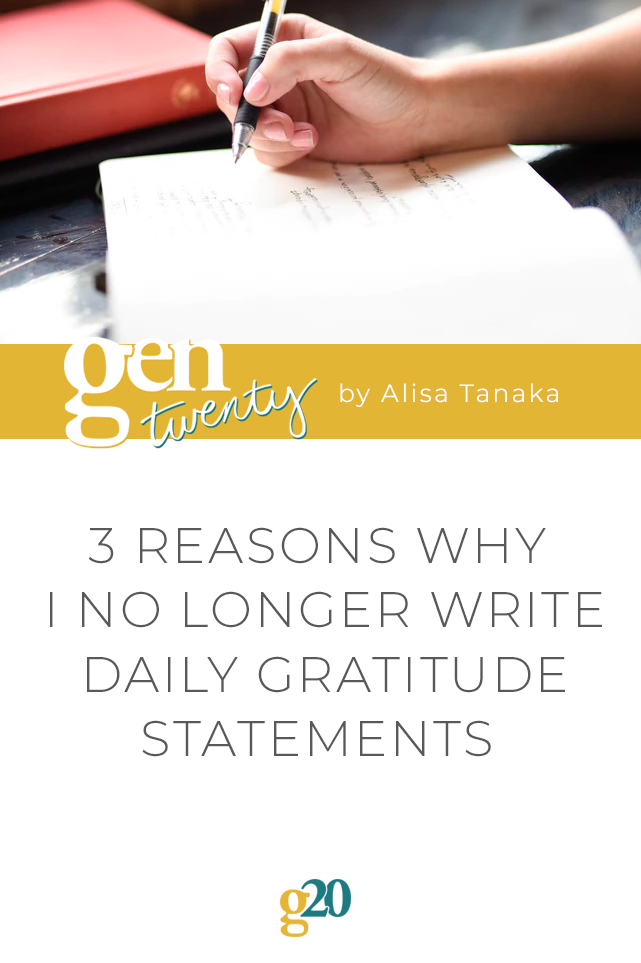 In recent years, the ideas of self-care and gratitude have become commonplace, especially because there is a lot of scientific research that highlights the benefits of gratitude statements. I personally don’t believe that you HAVE to find things to be grateful for very day. I don’t mean to say that the practice of writing gratitude statements is a bad thing — if it works for you, feel free to continue it.

In the years that have passed since I began incorporating it into my routine, I have found that I am firmly in the “don’t write gratitude statements every day” camp. Here’s why.

3 Reasons Why I No Longer Write Daily Gratitude Statements

1. I Want To Honor My Feelings If I Have A Bad Day

When I was being bullied as a child, I thought that the best way to deal with the emotion was to push it down and pretend it didn’t exist. I thought soldiering on was a sign of strength.

Instead, I discovered that the more I denied the emotion, the stronger it became. My negative emotions affected every aspect of my life and eventually culminated in a something dangerous. The experience taught me that it is easier to ride out the emotions and allow yourself to feel what you’re feeling rather than pretend not to feel the emotion at all.

The Japanese have an expression that I love for its appropriateness, “tsuyogaru,” which translates to “to pretend to be tough,” or “to put on a brave face.” It is not my intention to point the finger of blame at my cultural upbringing. However, I will not deny that I was certainly influenced by how my mother’s family (and my mother herself) refrained from showing emotion. In retrospect, I internalized this idea because I didn’t want to seem so sensitive, two words that were often thrown around in my house with a tone filled with the same level of distaste and disgust

READ MORE  What Is Friendship Now? A Detailed Look Into Modern Day Friendships

Yes, writing gratitude statements are great for shifting your perspective and they may help get you out of a rut. However, in my case, I find that on my bad days, the last thing I want to do is write gratitude statements. Instead, I prioritize feeling my negative emotions, which allows me to process those emotions much faster and move on.

2. I Find That It’s More Effective When It’s Genuine

I have always had high expectations, both of myself, and of others. When I first discovered the concept of gratitude statements, I expected everything I ever wanted to come flowing into my life exactly the way I wanted to, which in retrospect, is completely unrealistic.

One of the main reasons I don’t write gratitude statements every day is because I know that I tend to get attached to certain outcomes too quickly, and I get angry if things don’t pan out the way I expect them to. I find that it’s far more effective for me to write gratitude statements when I actually feel genuine gratitude for something rather than trying to force myself to feel an emotion I don’t feel and run the risk of getting attached to something.

In my experience, getting too attached to a particular outcome is a surefire way to not get what you want. Being honest with yourself and the other people around you about your emotions is a lot easier than carrying around the weight of lies, which can express themselves in a variety of ways.

READ MORE  How Birthdays Change After You Lose a Parent

Just because you don’t write gratitude statements every day doesn’t mean that they aren’t effective.

3 Reasons Why I No Longer Write Daily Gratitude Statements

We’ve all heard that consistency is key, especially with all the demands on our time. While I don’t disagree with the idea, I find that everyone’s experience with little habits such as gratitude statements are different. What works for one person may not work for another.

In my experience, I have found that consistency doesn’t always yield results. I kept up writing gratitude statements for more than six months when I first discovered the practice. While I won’t argue that I didn’t experience some of the benefits outlined in the scientific research, I found that for me, the negatives of the experience far outweighed the benefits I experienced. This prompted me to cut back on the number of gratitude statements I write and focus on other habits that I found worked better for me, such as journaling.

READ MORE  How to Set SMART Goals and Crush Them

I can only speak for myself when I say that my athletic experiences taught me that consistency can yield fantastic results, but like everything else in life, it also has a dark side. I am not in a position of authority to tell everyone who reads this what will work for them or sell them a magic formula.

Consistency led me to get too attached to a particular outcome. I am still in the process of finding things that work for me.

Why the pregnancy question isn't okay to ask.