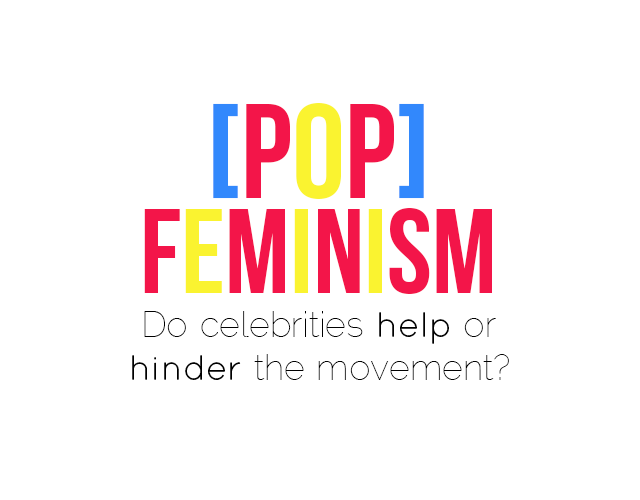 Between Robin Thicke’s “Blurred Lines” video, Miley Cyrus’ twerking, and Beyoncé’s post-baby sexual renaissance, feminism has become a popular topic in media conversation. The biggest pop stars of today have captured our attention with a revitalization of female sexuality, but are the images we see hindering or advancing a feminist agenda?

Here at GenTwenty, we’ve attempted to tackle this issue, and while we support the resurgence of feminism in pop culture, it certainly is not without its flaws.

Unfortunately, pop culture pushes the notion that the only way to be in the forefront, especially for women, is by being sexually interesting. There’s a reason Susan Boyle isn’t dominating media platforms, and unfortunately, the brief attention she did receive was only to highlight how her voice ended up defying the expectations set by her “ugly” physical appearance. At Boyle’s “Britain’s Got Talent” audition, she is visibly being judged on her looks, right before blowing everyone away with her voice. Piers Morgan called her talent, “The biggest surprise…” But why? Because, as Tanya Gold puts it, “…a woman has to have the bright, empty beauty of a toy—or get off the screen.”

The feminism of today is in full support of women bearing their bosoms or twerking on stage. If Miley wants to twerk to her heart’s content, that’s great, but at what point does it become objectification and exploitation? Many female performers turn sexuality into a gimmick, not an actual representation of their motivation to claim their femininity or support feminism. How much of Miley’s twerking performance is her asserting her sexuality, and how much of it is her being told by media executives that she needs to use her body for the attention? Showing her body off is not a problem if that’s what she wants to do, but it’s hard to tell from the outside if it is always her choice.

The people who keep talking about feminism, at least lately, are usually those having a higher degree of sexual behavior in their performances—as if that’s the only way to be a feminist. The discussion of feminism in pop culture has largely resurfaced in the context of women embracing the ability to behave sexually. In all fairness, perhaps this is predominantly the media’s fault that the conversation is centered on sexuality, but artists also have to be accountable for the images they put forward. We need to see female artists highlight their achievements and expressions of feminism in other ways so that the public can begin to understand the multifaceted nature of feminism.

Although sexuality is a crucial aspect of feminism, the movement has a much larger scope. Feminism is about women’s rights to make decisions about their own bodies, women’s rights to earn equal pay for the same job, an emphasis on education and achievement, and the destruction of gender norms (among countless other things). While we love to see Kesha and Beyoncé openly singing about female sexuality, we feel there are other issues that are also deserving of attention. Amy Poehler’s “Smart Girls” blogs and Lupita N’yongo’s Essence award acceptance speech are great examples of how feminism can embrace much more than a woman’s sexuality.

Pop culture doesn’t embrace every woman.   Jennifer Lawrence’s love for pizza and indifference towards her waistline is well-known. But think about the ladies we’ve discussed who are so vocal about feminism. Queen Bey, whose body is arguably more perfect now than before she had a little one. Nicki Minaj, who is well-known for her assets. Laverne Cox, tall and stunningly beautiful. No doubt these women’s public images are the “ideal,” but they contribute to feelings of inadequacy for the rest of us. Did you see Beyoncé’s “Drunk in Love” performance at the Grammys? My self-esteem is still trying to recover. It’s not that these women are at any fault for their picture-perfect looks. It’s the pressure of the industry and the expectation of their jobs to look a certain way, a shortcoming of the sort of “pop feminism” we’re seeing. We can talk about waking up “flawless” as much as we want, but we will never have legs like Queen Bey’s.

Pop culture and media fundamentally perpetuate the idea that there’s something wrong with how women naturally look (see Susan Boyle commentary above). Several celebrities would be nearly unrecognizable without makeup. Of course pop culture is a field of glamour, but what would be wrong with seeing celebrities as they actually are? If feminism is about embracing every woman, we need images of average-looking women excelling in pop culture. Wouldn’t it be nice to see someone who actually looks like you on the big screen? A recent article on this subject was just published, arguing that we need more “ugly” people on television.

Another related issue is that of inclusion. The feminist movement has a history of representing mostly white, middle class women, and feminism is often critiqued for still representing mostly white or cis women. Inclusion is an extremely important part of feminism, as feminism is not just for white women or individuals with vaginas. It’s for anyone who believes women should be treated equally to men, point blank. In this era of feminism in the limelight, we still see very little representation of trans women out there. Although Laverne Cox has gained fame for her incredible role in “Orange is the New Black,” it’s clear from Katie Couric’s interview with her that there are still room for the media to grow in how it addresses transgender issues. If an individual is introduced to feminism only through the media, they will not see the importance of inclusion and representation of all women (and men), which are both fundamental aspects of the movement today.

With all of that said, the depictions of feminism in the media are not necessarily a bad thing. Girls and women should surely see that it’s okay to be sexual, but we also need to see celebrities more openly addressing the work they do beyond performance. Pop stars have the influence and medium to share the meaningful message that one’s brain is just as sexy as one’s body. Their charitable efforts and business savvy should be discussed as much as, if not more than, who they are wearing or what sultry thing they did at a recent show. It’s time for celebrities to speak up and do more with our attention than entertain us.

READ MORE  What Matters More: The Moment or The Selfie?

Ellen Page recently stated, “How could it be any more obvious that we still live in a patriarchal world when feminism is a bad word?” Several celebrities have expressed doubts about calling themselves “feminists” as if there’s something taboo about it, advancing the concept that women are supposed to be seen, not heard. It’s fine to be objectified and hyper-sexualized, but if that is supposed to be a stand for feminism, you better not say it aloud. How is it empowering for any woman or man to think that there’s something wrong with identifying as a feminist? Shouldn’t the message be to embrace whoever you are without worrying about the judgment of others?

This reluctance speaks to a larger, societal issue of inaccurately defining feminism. It isn’t about radicalism, bra burning, pubic hair, or hating men; it’s about working for equality. Ultimately, the problem is that we are too busy trying to put feminism into a neatly wrapped package, not realizing that there is no one set way to be a feminist. As a movement, feminism is supposed to be a united front of individuals. I should be able to claim it my way, and still celebrate you claiming it in your own way, neither of us jeopardizing or judging the other. The burden of changing cultural mentality does not rest entirely on the shoulders of pop stars, but they have the means to make an impact. At the end of the day, even if it’s only to laud or criticize the actions of celebrities, at least we’re having a conversation about feminism.

Would you call yourself a feminist? What do you think about the representations of feminism we see in the media? Share your thoughts in our comments section below.

5 Documentaries That Will Change the Way You View the World