This post is part of series known as #30DaysOfThanks. 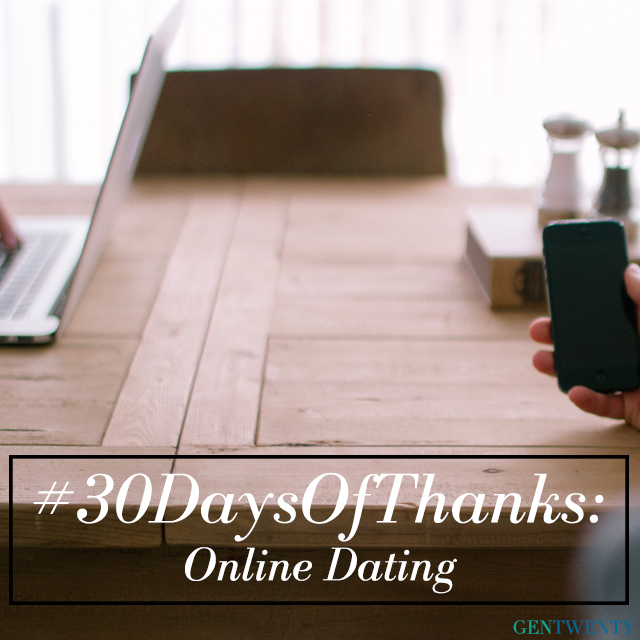 Online dating gets a bad rep. You could get cat fished. You could get abducted. Your parents and friends will laugh at you for it. I’m going to come out and admit it though: I’ve done online dating. And you know what? I liked it.

I dipped my toe into the world of online dating last fall. I had gone through a really rough breakup and didn’t have a whole lot of dating experience. I thought it might be healthy to try some online dating. I knew a friend who’d met someone through OkCupid. And at the very least it’d give me some experience with interacting with boys. I’d never been taken on a proper date either and I really wanted one damn dinner/movie shindig where I’d dress up and get nervous about spilling food on myself and running out of conversation topics before our food even arrived.

I made an official decision. I started setting up an account through OkCupid, put on something decent, and made my way to the bathroom for a mirror selfie. I groomed my profile to be honest, yet humble, and with topics and nuggets of information that would generate further discussion with a potential beau. I browsed through profiles to find commonality.

There was one guy who was really nice and I enjoyed talking to, but it felt like communicating with a brother or old friend. I imagined meeting up for pizza and him going in for a kiss only to have me pull away to say, “What are you doing?!”

I met up with one guy at a movie theater. He looked nothing like his profile picture. He massaged my neck during the movie and had incredibly dry hands. I effectively ruined the night by seeing a friend of mine outside the theater, yelling his name, and giving him a gigantic hug. More enthusiasm was to be had in that moment than in the entire date—oops.

One guy travelled around for work. He said he had a hard time taking girls seriously, but I had “that magic pixie dust or something” that made him change his mind. He was 22 and had slept with 28 girls. I said, “That’s gross,” and said goodbye.

One guy sent me a message saying he’d never done it before, but would I be up for a one-night stand and DTF. I said, “GTFO now.”

After never having sent a message to anyone on the site and only being the receiver, I did the unprecedented. I had been checking out this one guy’s profile every day, and he’d been doing the same to me. He looked so handsome, he liked Stephen King, he liked history, and he sounded modest. I finally wrote up a message saying he sounded like a really nice guy and I’d love to talk to him. He didn’t respond.

Fine! I thought. Be like that, you stupid, attractive, sweet-sounding, semi-nerd! A week later though, he did respond. We talked for almost a month before meeting up. I was in a different state on Christmas break and we arranged to meet at a quiet lounge bar once I got back to the big city. I showed his profile to my best friend. She thought he looked cute and sounded sweet. I stressed to her that he was a Taurus. A handsome Taurus.

All I’ve ever wanted in life is a handsome Taurus.

When we met up, he was shorter than I’d thought he’d be. And he’d shaved off the studly facial hair he had in his pictures. We got drinks and sat down and were awkward. By the end of the night we were cuddled up next to each other and I felt like I’d known this handsome Taurus forever.

There are creeps online. There are guys who lie and just want a piece of ass. There are guys like that in real life though too. But if you know what you want and don’t settle, you can find the best. You can meet a real gentleman who values you for how intelligent you are. A person who remembers what your favorite desserts are and asks how your friends are doing, who suggests having snacks and a movie day when you have your period, who kisses you on the mouth in front of everyone while waiting in line for food, who holds your hand just because and acts stupid to make you smile.

I found this guy, and I found him online.

Online dating changed my life, in the best way possible.

Are you thankful for online dating? Share your thoughts.

Conversations with a Blogger: Elle of The Lady Errant

It is our pleasure to introduce you to Marielle aka Elle aka The Lady Errant. Elle is a self-described dilettante who has spent...