We allow our bodies to retain large amounts of toxicity, holding it in our skin, letting it simmer in our chests and rest in our hearts. The toxicities live in our headspace, and often we may not even be aware of how much negativity we are enabling in our lives.

We allow our bodies to retain large amounts of toxicity, holding it in our skin, letting it simmer in our chests and rest in our hearts.

Toxicity can come in many forms.

Perhaps it’s a destructive relationship with a toxic personality, filled with negative energy. It can be a toxic work environment, living space, roommate situation, friendship, romantic relationship, family member, or relationship with self. Maybe it’s a toxic belief, one that silently corrodes your insides often without you even realizing. The toxic belief systems and thoughts that you hold in your mind manifest themselves in your body and they can tear you down daily.

The toxic belief systems and thoughts that you hold in your mind manifest themselves in your body and they can tear you down daily.

Often, we allow toxicity to remain in our lives because it is serving a purpose, satisfying some subconscious belief. It’s possible we think we deserve to be treated poorly, or perhaps we feel guilty cutting a toxic person out of our life. We might think we’re unworthy or undeserving of feeling good, and we’re afraid to let ourselves exist in joy.

Toxic beliefs may be the most detrimental.

Holding a belief in your heart that you may even be unaware of can create so much hostility in your bones. A domino effect can come into play here; the belief can lead to harmful behavior, which most likely allows for others to treat you badly, spiraling into increasing forms of toxicity.

Many of us have toxic dietary beliefs, making food the enemy and developing damaging eating habits. This type of belief might be that fat in food equals fat on the body, deriving pleasure from food is bad, or eating anything “unhealthy” is morally wrong.

You may have toxic thoughts toward yourself, your body, the way you are, and what you believe you deserve. Perhaps you think that you’re not worthy for whatever false reasons you’ve come up with in your head, when the fundamental truth is that we were all deemed worthy and deserving of this life when we were born into it.

Societal whispers may have caused you to adopt toxic beliefs, such as being far too busy and overworking yourself is the only way to be acceptable, and your worth comes from the amount you’re doing, not the way you are as a human being. The nudge toward perfection may have been internalized as the only way to be loved. These wildly false opinions may have seeded themselves under your skin unknowingly, creating irritation and harm.

Starting by asking yourself what beliefs are resting in your heart and mind, and then allowing the question to rise of why you believe these things, and what subconscious purpose they are serving, can begin to break up the toxicity created by these beliefs. The underlying purpose may be to keep you small so that you can stay safe, never let people see you or take risks so that you never get hurt, and infinite other possibilities.

When these beliefs are questioned, often you’ll discover there is no valid answer to why they are helping you. No response actually holds truth, and perhaps you’ve been holding the belief because somewhere along the path of your life it was instilled in you in order to serve you at that point in time, but now it’s no longer useful.

You can begin to deconstruct the belief and its power over you through first becoming aware of the ingrained belief, and then realizing whether or not it still applies, or if it ever did. The purpose served by these beliefs is rarely positive or for your greater good.

Without good reason, there is no proof to back up the belief. We often search for proof of toxic beliefs unconsciously through creating more situations that feed our negative view. We create the proof of our beliefs. When we become aware of these patterns and what the belief systems are that we’re trying to maintain, we can edit the thoughts we replay and replace the toxicity with positive and loving truths. Instead of subconsciously creating situations that back up the toxic belief, we can begin to change our behavior and be aware of the thought process, catching the self sabotage before we engage in it.

We hold onto toxic relationships and people for similar reasons; they satisfy these toxic beliefs about ourselves. Through allowing others to mistreat you, you let those around you reinforce the belief that this is what you deserve. Perhaps you’re telling yourself you’re unworthy or not good enough or whatever false tale your mind has taken in as truth. Cutting the cord and releasing that which does not serve your highest good is empowering and adds to your self respect. It is self care and self love to say a wholehearted no to what hurts you, something you desperately need if you allow too much toxicity in your space.

If you do not care for yourself, there will be nothing left of you to care for others. You must release the toxicity because you were not meant for it, and you deserve to feel light and free of the heavy weight of toxic thoughts, beliefs, people, environments, and energies.

Avenues of toxicity release can take many forms.

Simply through breath, breathing deeply in and all the way out, you can begin to move the negativity out of your body.

Releasing physical toxicity can occur through eating clean, whole foods and listening to what your body needs, as well as engaging in movement that feels good to your body. Leaving a negative workspace or living space, quitting a job filled with pessimism, and valuing your time enough to not engage with people or places that drain your energy, can leave you feeling lighter, cleansed, and detoxified.

Rewriting toxic beliefs and reminding yourself every time the old patterns resurface that this no longer serves you is vital to letting go of self inflicted harm.

Affirmations and repetition may help this effort, as well as simply remaining present with and aware of the thoughts that are repeating themselves in your head. Employing self care and self respect to cut off toxic relationships without guilt, and choosing not to spend time around people that drain you can make you lighter and more of who you’re meant to be. 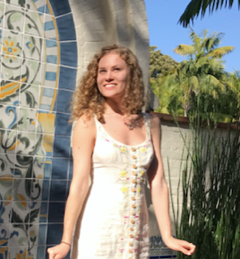 Isabela attended Lewis and Clark College, the Institute for the Psychology of Eating, and Matthew Kenney Culinary Academy. Her interests include ceramics, baking, being outside, poetry, and dancing. Her long term career goal is to do positive and loving work in the world to help people, and to inspire, lift, and spread as much light as possible to other humans.

READ MORE  Maid of Honor Proposal: How I Asked My Best Friend to Be My MOH

Previous Post: « 4 Money Habits That Changed How I Spend (and Save!) Money
Next Post: Les Mills On Demand BODYCOMBAT™ Review »

More in Note To Self, Self Development

4 Money Habits That Changed How I Spend (and Save!) Money