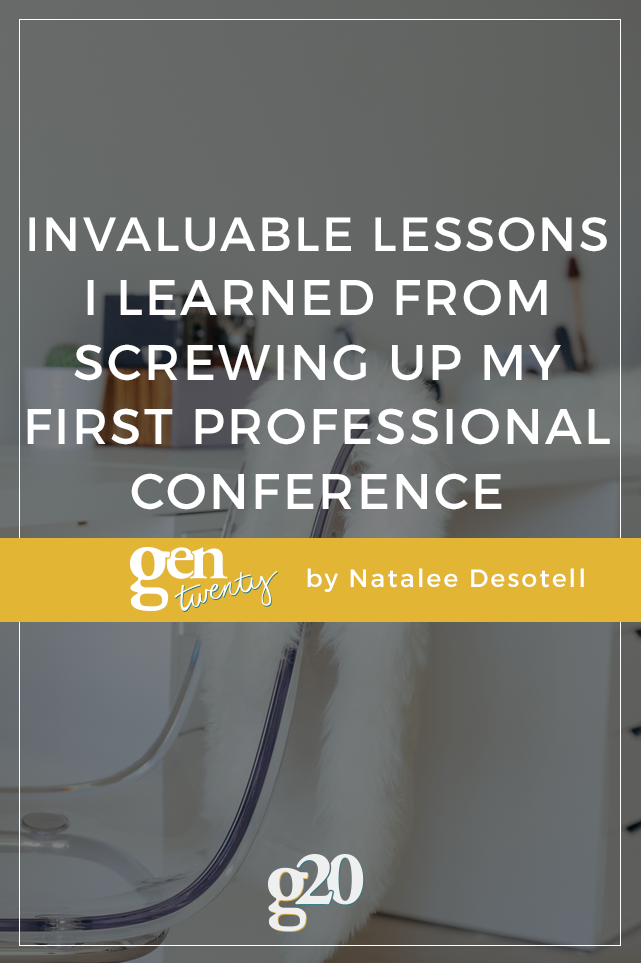 I’ve read a networking article or two, or three, or a million, but networking is a still terrifying concept to me. I’m just getting started out in my field, though, so networking isn’t exactly optional.

When I got an opportunity to attend my first-ever professional conference this summer, I booked my flight right away. And then I freaked out.

How do I even prepare for a conference? What do I wear, and what do I bring each day, and how do I avoid giving off my usual “I’d rather be in bed watching Netflix” vibe?

I did a lot of research beforehand and did some stuff right, but there are a lot of things I’ll change for next time. Hopefully you can learn something from my mistakes and have a better first conference experience.

1) I brought business cards, but no one got one.

I designed and printed some gorgeous business cards, if I do say so myself, but not a single one left my wallet. I struck up a few conversations with people, but felt too awkward to whip out my card at the end of the conversation. I kept thinking “oh well, I’ll give the next person my card.” And then I didn’t.

The main issue was that I didn’t connect with people very well. I mostly met older people who are working in parts of the industry that don’t interest me a lot, so I didn’t make much of an effort to keep the connection going. But even though I don’t want a job exactly like theirs, there would have been no harm in connecting with them anyway.

Also, since I am a student and most of the people I talked to were already established professionals in the field, I feel like maybe they didn’t have much of an incentive to give me their card. The onus was on me to say something like “it was nice talking to you, get in touch if you hear of any opportunities”. I’ll have to remember this for next time.

READ MORE  A New Outlook on Life From a Recovering Perfectionist

2) I attended several seminars but got nothing out of them.

Since I’m just getting started in this industry, my knowledge is pretty limited compared to the established professionals. I went to a lot of seminars with titles that intrigued me, but they were far too specific for me to fully understand.

Some of the seminars required specific knowledge about a geographic area or another industry. I didn’t know enough to understand everything they were talking about, so I spent the better part of some seminars doing crosswords on my phone.

What I will do for my next conference is focus my time on workshops, exhibits, and planned networking activities around the city. This way, I’ll come away with new skills, some free stuff, and maybe a few business cards.

There is no way I am going to visit a new city and not explore, so I ended up using some conference time to do that and (cringe) I actually skipped an entire conference day to sit on the beach and enjoy my surroundings.

I feel awful that I skipped a whole day of the conference that I had traveled so far to attend. It would have been better to schedule an extra couple days before or after the conference specifically dedicated to sight-seeing and relaxing.

I was not the only one in town from my school, so I got together with some fellow students, professors, and other faculty. One night, it quickly devolved from a casual “few drinks” to a wild time.

Since this was a professional trip, I assumed that everyone else in the group would keep it professional and low-key, so I was keeping pace with everyone else and relaxing. Before I knew it, it was four in the morning and I had a seminar to get to in four hours.

There is something to be said for making fun memories with professional acquaintances, sure, but it can quickly get into murky territory. Next time, I’ll remember that it’s my responsibility alone to maintain control of my night (which is probably a smart tip for any night out).

Just because I’m out with people who I have a purely professional relationship with does not mean that it won’t get out of hand. This seems like a no-brainer looking back, but it wasn’t at the time.

What I Did Right

With all the things I did wrong, there was some stuff I got right the first time and I’ll share those, too.

I only brought a small suitcase for the week with a few basic pieces that mixed and matched to make different outfits. There’s no need to bring five complete outfits when a blazer, one pair of pants, and a couple dresses will do the trick.

I also did a great job poring over the conference agenda and making a list of the sessions that sounded best to me, as well as mapping out their locations early on.

Again, next time I’ll prioritize workshops and other activities (until I’m at a professional level where the sessions make sense). But hey, I did a great job scheduling my days for a first-timer.

Next time, I hope this will lead to an exchange of business cards.

Overall, it was a great experience for a first conference and I am so happy I went. Even if I didn’t make the professional connections I’d hoped for, I did learn how I can do a better job next time.

I Screwed Up My First Professional Conference Experience

Have you ever been to a conference? What did you learn from your first time?

Previous Post: « An Inside Look at The Life of a Self-Published Writer
Next Post: Lifestyle Changes to Help Reduce the Risk of Cancer »

An Inside Look at The Life of a Self-Published Writer

Ever wonder what it's like to self-publish your own novels? Author Rachael Tulipano shares her journey with us.