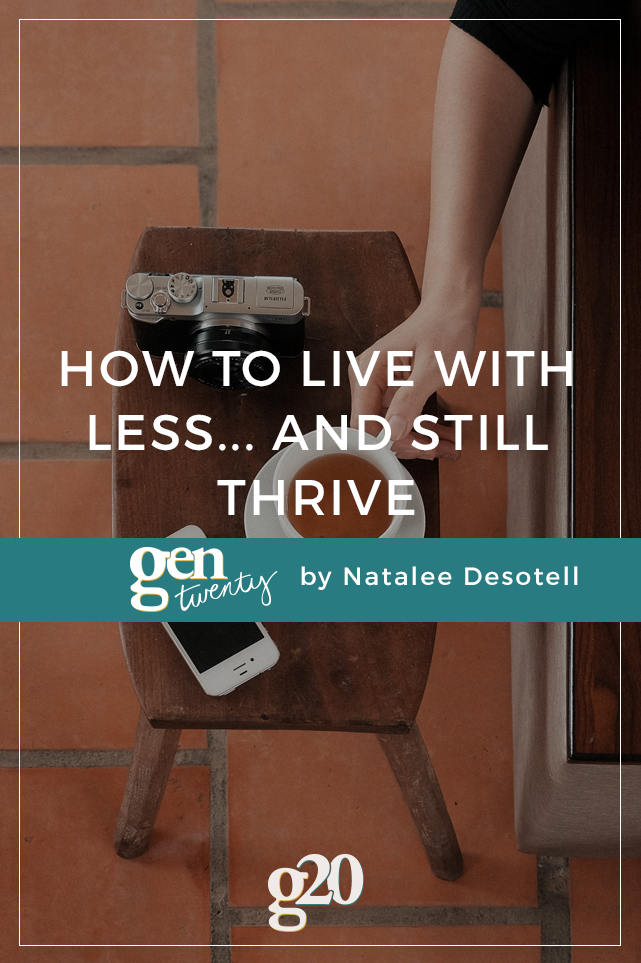 A year ago, my life was completely different than it is now. Some people would say I’ve downgraded, and I guess that’s true. But I’m making progress towards my future and that means more to me than material possessions ever could.

Last year, my husband and I were toiling away at full time jobs from 8 to 6 pm (in what universe is a 9 to 5 actually a 9 to 5? I want to know). As such, it made sense that a couple of millennials in our position would occasionally go out for dinner, subscribe to things like Netflix, have a car, and rent a decent apartment.

We lived that way for about a year after we each graduated with our degrees, but soon it became apparent that we were simply treading water financially. Our student loan bills took up nearly 25% of our take home pay, with rent taking up another 30%. Add in a car bill, internet, insurance, and on and on, and suddenly we were unable to save for the things that matter. I’m not complaining, because we are far from the only millennials who were in the same position. We decided something had to give.

Where to Cut Down

While taking the time to fully understand our debt and come up with a plan to amortize it, we looked at other areas of our life that we might be able to pare down.

First, the food and drink. We love trying new things, and there’s no better way than by trying new restaurants and going out with friends for the occasional pub crawl. It wasn’t uncommon for us to drop $60 on a night out a couple times a month. Since evaluating our finances, we’ve been eating at home much more frequently and even cutting down on the groceries we buy.

We decided to live by the mantra “Quality over Quantity,” so when we do eat at a restaurant, it’s somewhere we really want to go. We also buy fewer groceries than we used to (mostly because of the no car thing, I’ll get to that). We focus on buying just a few things that we need for our weekly meal plan and pretty much nothing else. No wasted food = no wasted pennies!

Since we’ve cut down on the food and drink spending, our lives haven’t been impacted at all. We’re simply more organized about our meal schedules and more stringent about waste. It feels good to save money and to reduce the number of rotten bags of potatoes I have to throw out each year! It’s also nice to look at our spending history and see Chipotle listed exactly zero times (it’s good, but is it that good?).

Then, we realized that our many subscriptions (Netflix, Hulu, Spotify, New York Times, etc) all added up to a significant sum. We got rid of them all, which may have been the darkest period in my post-grad life. YouTube is okay, but I can only watch so many My Drunk Kitchen videos. I need The Mindy Project in my life and I need it now! So now we trade off and on which subscriptions we have, keeping a maximum of two at any given time. We have barely noticed this change because once we tire of everything on Netflix, we cancel it and get to see what’s new on Hulu! Plus they usually give us a deal for coming back.

Why I Got Rid of Netflix

Next, our car situation was out of hand. We had leased it when we probably (definitely) should not have. Important life lesson: just because you have the money for something doesn’t mean you can actually afford it! We didn’t understand the difference when we signed those papers, so we were locked into paying out 15% of our income for it (not including gas!).

It was so nice to have a car, but it was not necessary at all in the city we live in. In most cities, public transportation is all you need to get around and sometimes employers even will pay for the pass. Our lives have only been impacted in a few ways: we have to walk more (a good thing!), we can’t buy more than a few bags of groceries at a time (another good thing!), we can’t leave the city without a ride from friends or family (sad face), and more of our paychecks belong to us now. The positives outweigh the negatives by far.

After all those changes came the biggest change of all. My father in law lives in a house in the same city we live in, so it was a no-brainer to at least bring up the idea of us moving in. I never envisioned living with an in-law, but he had some empty rooms and lived in a part of town I’ve always wanted to move to. Not to mention, not all millennials have this option and we felt like we needed to take advantage of it while we could. After we got the green light from the FIL, we moved our stuff in and haven’t looked back.

Living with an in-law or parent is a nightmare situation for some, but for us it gives us more freedom to do what we want to do. We had just about the cheapest rent that was available in our city, yet we were still having trouble saving as much as we wanted to. Plus, I wanted to return to school and it would have been impossible without both of our full-time paychecks.

The adjustments to our lives since moving in have been minimal. Obviously we need to be respectful of another person’s possessions and space, but it’s not a problem at all. Our rent payment was cut in half, which has allowed me to return to school and pursue something meaningful to me.

So, yes, I’m living with much less than I was last year, but now I have so much more: freedom, opportunity, and a little bit of savings.

5 Ways to Boost Your Career

All of the effort you put into your career will pay off.