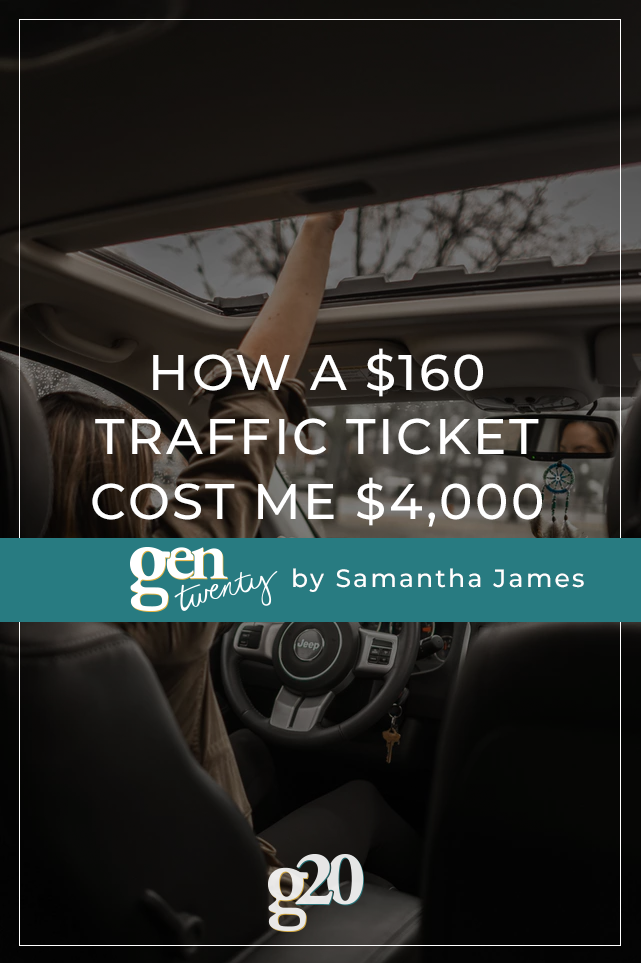 Have you ever had a traffic ticket? In my 15+ years of driving, I’ve only ever had ONE. And it just recently happened, a little less than a year ago. It wasn’t for speeding. But it cost me A LOT. More than just the price of the ticket.

I was driving home from work one day, chatting with my friend on the phone to catch up and pass the time while sitting in bumper-to-bumper traffic. I was using speakerphone and had my phone propped.

The connection got staticky so I picked up my phone to hold it closer to my ear (but not on my ear) so I could hear better, and then the next thing I know a police SUV is indicating I should pull over. I was mortified. I pride myself on being a very safe driver, and while I was in the wrong, I also didn’t know what I was doing was wrong.

You see, I thought if my phone was on speaker it was considered “hands free.” Nope, there is so much more to it. There are also different rules per state, and I had recently moved to a new one.

So, I was ticketed, and the officer patiently listened to my questions so I could figure out what was allowed. Turns out, I hadn’t been using my phone in my car correctly, and I could have been racking up much higher tickets for using my phone GPS without it being mounted, or for having both headphone buds in my ears.

I tried to accept my ticket with grace and move on. But I was really kicking myself I hate messing up and felt so dumb. I paid my $160 ticket and vowed to practice safer phone habits.

This was my first ticket. I’ve never been in any driving trouble before, but I didn’t anticipate how this $160 ticket would end up costing me so much more.

About six months after my ticket, I went on to buy my very first car, and leave my mother’s insurance. Before, I had lived in cities and not needed a car, so I would just borrow hers whenever I needed one and I was tacked on to her coverage plan.

However, when I went to get my own policy for the very first time so I could buy a car, I learned what that traffic infraction would cost. Because I was a new policy holder, my insurance quote was already high. I shopped around, and asked friends what they paid in similar areas, but kept finding such high quotes.

I called several agents, and finally when I found a policy I felt comfortable with, I was ready to purchase. Then, as my agent helped me set things up, even she kept saying that I should have a lower price.

Finally, she realized, because of my ticket, my price was high.

I hadn’t even considered it, because it was a ticket for talking on a cell phone while driving, but in my mind I had been sitting in bumper-to-bumper traffic and not moving. I had blocked it from my mind. And because in my state moving traffic violations stay on your driving record for 5 years, this newly issued ticket would stick with me for a long time.

The cost of the insurance hike from that one stupid moment of my life will end up costing me an extra $4,000 in insurance for the next five years. So, that one moment and $160 really is five years and $4,000+. Suffice to say I really learned my lesson.

My warning to you: Make sure you are driving as safely as possible.

Learn the rules for your state, and for any states you’re traveling to if you’re planning to drive. My first priority for myself and for others is to STAY SAFE and BE SMART. But educate yourself, know the rules of your state, know how to protect yourself financially too while protecting yourself and others in the car.

READ MORE  Retirement: Why You Need to Start Saving NOW
Previous Post: « 10 Powerful Mantras To Give You Self-Confidence
Next Post: The Top 5 Financial Priorities You Should Have In Your 20s »

How I Prepared My Finances For a Baby

Adding a member to your family is expensive.