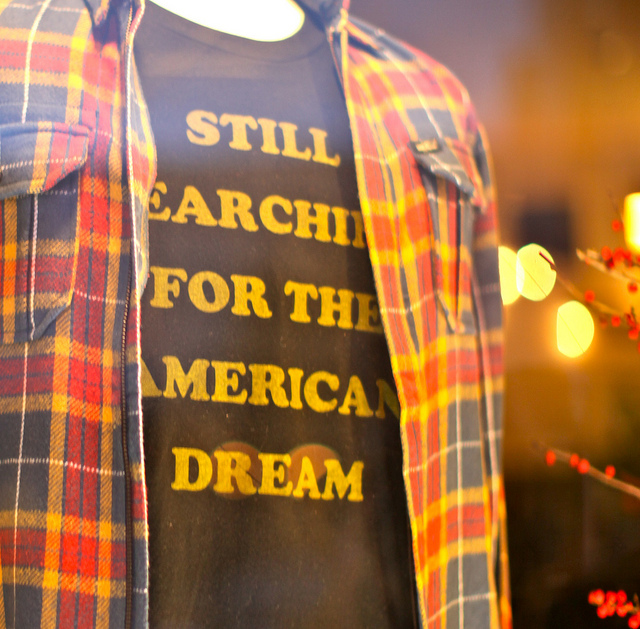 In my inaugural article here at GenTwenty, I examined the phenomenon of twenty-somethings “growing up” later.  On average, we’re delaying home ownership, waiting longer than our parents did to start families, and many are still frothing milk for lattes at the age when their parents were building successful careers.  In a nutshell, our lives are not taking shape in the way that the American Dream suggested.  In that article, I concluded that our delayed milestones had to do largely with shifting personal preferences; many of us want to take time to travel, continue school, and enjoy our freedom before we take on the  titles of “parent” and “homeowner” and all the responsibility that comes along with them.

But of course, a shift in personal preferences is not the entire explanation. A recent study by Credit.com and GfK Custom Research showed that nearly a quarter of Americans ages 18 to 24 now define the American Dream as living debt-free.  Forget the big brick house and two-car garage.  Forget the 2.8 college-bound kids.  Forget a shiny new car.  Forget saving for retirement.  The new American Dream is basic financial stability.

The myth of upward mobility
The late great comedian, George Carlin, said, “it’s called the American dream because you have to be asleep to believe it”.  Of course, he wasn’t the first to poke fun; the American Dream has long been ridiculed by pop culture (The Great Gastby, anyone?) and challenged by those who see its shortcomings. However, at the same time, it continues to be referenced by our politicians as the end-all-be-all pinnacle of success which can be achieved simply by “pulling yourself up by your bootstraps” (which, fittingly, is a physical impossibility).

The ideal of the American Dream originated with the birth of our nation, and it continues to be a part of our national identity.  Many of our ancestors arrived in droves at Ellis Island in hopes of securing a piece of the pie for themselves, and the United States continues to be a beacon of hope for those risking everything just to have a chance at it.

However, socioeconomic mobility is not as cut-and-dried in the United States as we keep telling ourselves.  For example, our parents’ incomes predict our future incomes more accurately than we would expect if there was a high level of mobility — where you were born has a lot to do with your opportunities, as well as who you were born to. Further, the hurdles that people of color face in socioeconomic upward mobility are significantly higher than those of European descent; not only do they tend to start at a lower income level, but they continue to face more academic and professional barriers throughout their lives.

Our national ethos relies on the notion that hard work is the only necessary ingredient for success, but it leaves out the fact that one also needs ample opportunities, the means to take advantage of those opportunities, a lot of luck, and probably light skin.  Some amount of elbow grease is necessary, but it’s not sufficient.

The new dream
The recession that hit in 2007-2008, coupled with rising student loans, was enough to make the middle class discover what the poor have always known, that our beloved national ethos has very little to do with hard work.

Even for those of us who had the privilege of attending college, our freedom to forge our own paths in the image of the American Dream is still severely limited.  It’s as though we signed our lives away before they even began, only because we knew that a degree + debt was better than never going to college at all.  But even though we thought we were doing the right thing, many of us are now crippled by debt and are unable to make a dent in it with low-paying jobs. Rather than working towards the milestones within the blueprint of the American Dream, our more immediate concern is trying to get out of the red.  Many graduates are even moving back in with their parents, pushing dreams of graduate school, and a fulfilling career back many years while working dead-end jobs just to keep up with the monthly payments.

While our parents may have started off with nothing but the clothes on their backs (or so they say), the class of 2013 is graduating with an average of $32,500 in debt, and that number is likely continue to balloon for future graduates. With that in mind, the American Dream of old is now put on the back-burner while we work to achieve the same level of nothingness that our parents had.

We have always worked hard and will continue to work hard, but our expectations about what we will get out of that effort has shrunken significantly.  I’m looking forward to international travel, living in a nice apartment in a big city, and having kids with my husband; all of these things will have to wait until we can finally achieve the new American Dream of zero debt.

Reports have been coming out for years about the fate of our generation: we won’t make as much money as our parents, retirement will be very difficult or impossible for us, as we may not even live as long.  I think we’re all beginning to see some truth to these predictions, but there’s not much we can do about it. The challenging realities of a slowly recovering job market — paired with a mountain of debt– have spurred a shift in mindset about what we can realistically achieve in our twenties, sparking the realization that the American Dream we grew up believing in (however naively) is more myth than truth.  We’re adjusting our expectations accordingly.  Instead of a big home, children, and a fulfilling career, we dream of releasing the anchors from our ankles so that we can just get our heads above the water.  Then, maybe we can dream of more.

Black Friday: To shop or not to shop?

It’s that time of year again. Halloween is over, and with the ever-increasing commercialization of the holidays, that means it’s...