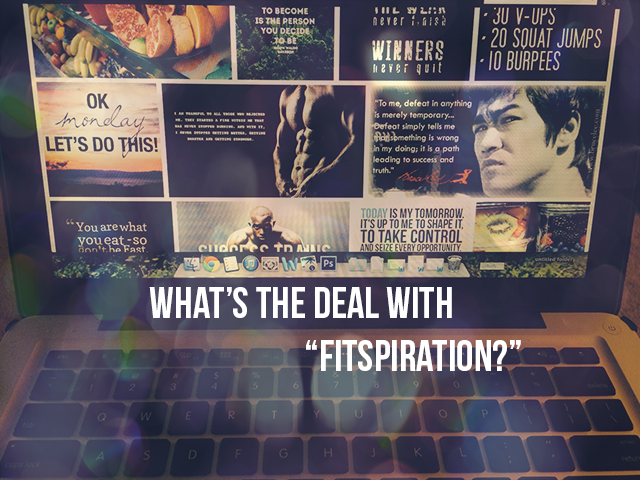 All I wanted was a healthy recipe for homemade granola, but what I found was much more valuable.  In the winter of 2011, I stumbled on the “fitspiration” community (a portmanteau of “fitness” and inspiration”) on Tumblr, a social blogging site.   The fitspiration community (“fitspo” for short) is a network of blogs that focus on various aspects of health and fitness, often sharing healthy recipes, exercise routines, and inspirational messages.

At first, I thought I had found my magic pill for weight loss. With inspiration from the online community, I could surely obtain the body I’ve wanted since my teenage years: washboard abs, a thigh gap, and jeans in a size two. That’s reasonable enough, right?

I immediately started my own fitspo blog and began meeting people who were also chasing after their dream bodies. I skimmed through photos of super fit athletes, instructions for fat-burning cardio routines, and lists of “negative calorie” foods (which, by the way, do not exist).  I had all the answers at my fingertips, so I expected to be stick-thin in no time.

Among the wealth of weight loss tips and photos of supermodels, though, I started to see posts about a little something called “body positivity.” I was intrigued by the absolutely insane idea that maybe my body is fine as it is. I followed more body positive fitness blogs and learned things like: a restrictive 1,200-calorie diet is not the way to a healthy body, a thigh gap is unattainable for most of the population, and even supermodels do not look like supermodels all the time.

It suddenly occurred to me that everything I had been doing and thinking was wrong. My body has never been the problem; my mind was.

What I was seeing online immediately started seeping into my life. I started to see exercise as a treat to my body instead of punishment for adding sugar to my coffee. I started viewing my weight as a rough guideline for my health rather than a measure of my worth as a human being. I started to see calories as fuel for my body. I started to appreciate the so-called “imperfections” that I had been fixated on changing for years.

Since my philosophy about health and the way I view my body have changed so dramatically, I have been a much happier and healthier person. I owe all of this to the tens of thousands of people sitting at home on their computers, sharing their stories and advice for how to live a healthy and positive life.

Despite all the good stuff, there are still some problematic circles within the “fitspo” side of Tumblr.  Some still glorify the thigh gap and the very dangerous “ABC diet,” while others have an “all or nothing,” no-indulgences-allowed mentality.  From where I stand, though, those blogs are not representative of the whole; the prevailing message of the community is a positive and balanced one. I have learned so much about how to live healthfully, to accept my body the way it is, and not let my weight define me. Oh, and I can make a mean batch of granola now.

What I learned from Alice in Wonderland

Disney's Alice in Wonderland is a cult classic that teaches us many relevant lessons about growing up and coming into...