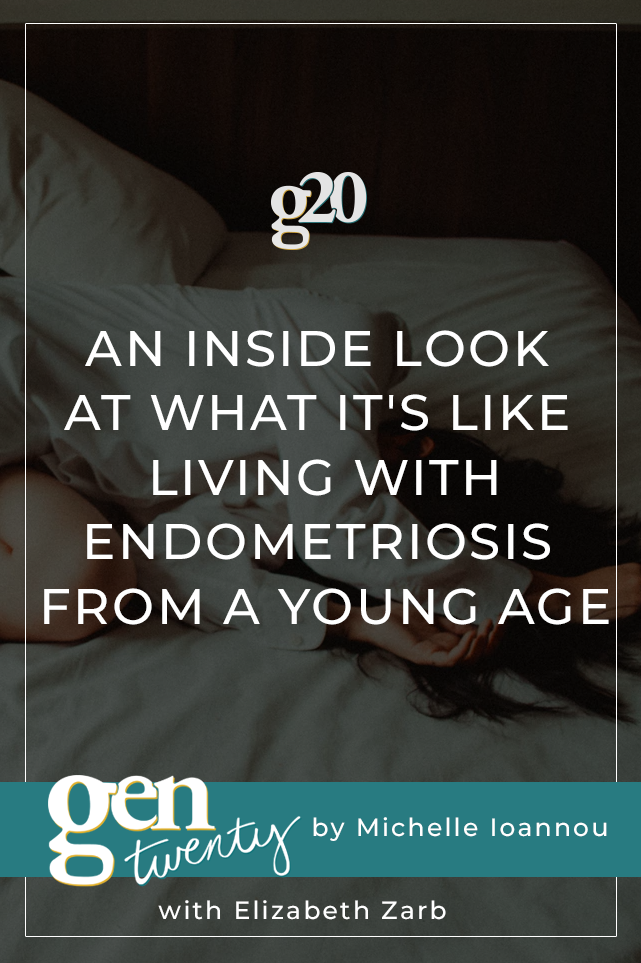 I don’t suffer from endometriosis, but my younger cousin, Elizabeth Zarb, does. I’ve seen her struggle with it for years — both before she knew what it was, and after. Even with a diagnosis and finally knowing what was going on, it’s not as though it just got better. It’s much more complicated than that.

“Endometriosis affects an estimated 1 in 10 women during their reproductive years (ie. usually between the ages of 15 to 49), which is approximately 176 million women in the world.”

Basically, it is more common than you may have originally thought. Yet, it would not even be surprising if you hadn’t even heard of endometriosis, or realized how severe it could be.

For those who may not be familiar with endometriosis…

“Endometriosisis a condition in which tissue similar to the lining inside the uterus (called “the endometrium”), is found outside the uterus, where it induces a chronic inflammatory reaction that may result in scar tissue. It is primarily found on the pelvic peritoneum, on the ovaries, in the recto-vaginal septum, on the bladder, and bowel.”

Now that all of the technical stuff is covered, let’s hear from Elizabeth directly — my 20-year old cousin, who currently suffers from endometriosis.

How old were you when you were diagnosed with endometriosis? How long have you been living with it so far?

I was 18 when I was officially diagnosed, but I was told that I could possibly have it when I was 14. I had been experiencing symptoms since I was six years old before that.

It was quite the process to finally get diagnosed with it, right? Why is that?

Endometriosis does not show up on sonograms. Because of this, a lot of doctors won’t immediately say it’s endometriosis.

I first went to the doctor for it when I was 14, but he would just say it’s dysmenorrhea (which is the medical term for bad period cramps). It took four years of birth control just completely not helping before my gynecologist sent me to a pediatric gynecologist, who officially made the diagnosis.

What suggestions have the doctors had in terms of treatment?

The IUD would keep the endometriosis at bay and delay it growing back since it was continuous hormone therapy. The surgery and the IUD combined has really helped, and now when I have cramps they’re not nearly as bad as the ones I had pre-surgery.

Flare-ups still happen, correct? How often and what do those feel like?

Oh GOD of course flare-ups still happen. My last period, actually, was really really bad in terms of flare-ups; I was just laying in bed all day, taking Tylenol much more frequently than I usually do.

Usually, these flare-ups happen every couple of periods. When I don’t have a flare-up, the cramps are painful but not intolerable, and while I bleed for two weeks, it’s very light for most of that time. During a flare-up, the cramps keep me up at night and prevent me from doing much, and I was bleeding very heavily.

These flare-ups occur because even when you have the surgery, the endometriosis can grow back, and it’s likely mine has begun to grow back. However, as painful and annoying as the flare-ups are, they’re still not the same amount of pain as they were before I had the surgery.

What are the two main things you wish people knew about endometriosis, especially from someone who has had it from a young age?

Endometriosis is hereditary. If really bad periods run in your family, it’s very likely that endometriosis is what’s causing it. Don’t just assume that you got bad genes when it came to periods, but rather ask your doctor if it’s possible that it could be endometriosis.

I also wish that people knew that endometriosis isn’t just bad cramps. My endo caused severe bleeding, which would make me light-headed, it caused a dysphoric depressive disorder called PMDD, and it frankly was ruining my quality of life.

A lot of people don’t take period problems seriously because “oh everyone deals with it,” but it’s a really serious disease. I would have to constantly miss out on things because I couldn’t walk once a month. On really bad periods it hurt to breathe and speak. People aren’t just “being dramatic” when they talk about bad cramps, they can be detrimental.

What advice do you have for people — both young and older — suffering from endometriosis?

Do not stop seeking treatment! If you are undiagnosed, it could take years to get the proper diagnosis (which is BS in its own right). Once you do get the diagnosis, try birth control before you seek out the surgery, but know that it’s very likely that you’ll need to get the laparoscopy.

The laparoscopy is a very easy surgery to recover from, and it really is life-changing. If you’re someone who has had the diagnosis and has had the surgery, don’t get discouraged if the symptoms start coming back; endometriosis grows back. Just continue a good dialogue with your doctor.

And most importantly, look out for other people who suffer from endometriosis! Because it’s an invisible disease, and because so few people know what it is, it’s important to have a support system.

What has comforted you the most?

I’m comforted by the fact that I had the procedure done so young because it allows me to give advice to other people who think they might be affected by it.

I’m comforted by the fact that my mother and my aunt also have it, as they don’t try to invalidate what I’m feeling but rather understand. I’m comforted that the stigma behind periods has been breaking slowly over the past couple of years, making it possible for people to talk about endometriosis and for articles like this to be written.

The most comforting for me was the photographer Georgie Wileman’s #ThisIsEndometriosis project, where she has created an entire photoshoot based on spreading awareness for endometriosis. Just finding out that people I follow online, like Halsey or Julianne Hough, also have endometriosis makes me feel more visible.

And at the end of the day, the most comforting thing is my heating pad and my bed. They’ve really got me through a lot.

Endometriosis affects millions of women worldwide. As with all health issues, speak with your doctor or primary care physician to determine the best diagnosis and treatment for you. If you do suffer from endometriosis, know you are not alone.

Michelle graduated from Fordham University with a Bachelors of Arts '13 and a Master of Arts '14. She is currently working on social media and event planning in the nonprofit world while blogging on the side about the Mets. Her interests include The Mets, The Patriots, iced coffee, Greece, and escaping to tropical islands. Her long term career goal is to continue to share her story and experiences to help as many people as she can.

Here are eight things to think about before hitting "submit" on that application.