I was 13 and on the verge of graduating eighth grade. Our school’s yearbook had just come out and a group of classmates were standing together, flipping through the pages. I asked one of the boys if I could see. He looked at me, and I will absolutely never forget what he said: “I don’t share with devil worshippers.” I looked exactly like everyone else in my Catholic school uniform, only I had cut slits in my sleeves for thumbholes and wore maroon Etnies.

I was 15 and in the middle of my sophomore year of high school. I hadn’t been invited to something-or-other, which must have been important at the time.  Important enough for me to ask a friend if she knew why I hadn’t been invited.  She told me the other girls thought I was weird… and heartless. I cried that night, and so many nights afterward, because if those girls only knew that I did my best to seem uncaring and cold to mask how lonely and miserable I really felt, they’d understand who the heartless ones really were.

I’ve been a misfit for as long as I can remember. My classmates thought I was a freak for wearing too much black, for being horrible at sports, for being too serious, for spending more time in the library and writing in my journal than anything else. I wore too much eyeliner and listened to weird music, I never flirted, and I could always count the number of friends I had on one hand.

Once I got older though I realized I wasn’t as much of an oddball as I’d thought. All that time reading and writing has turned me into a decent scribbler who contributes to a magazine that has thousands of readers every month. I still wear tons of eyeliner, but now I get compliments from other girls on my fierce cat eye style. Black is chic, and it’s slimming. I’ve got a boyfriend who thinks I’m gorgeous and smart as hell.  And I know exactly who my real friends are.

Really, everyone is a freak in some way, and everyone feels like one in some way. You don’t have to be a doom and gloom spooky kid like me in order to know what it is to feel out-of-place and awkward. Everyone has a characteristic or 10 that they think makes them weird.

If my wisdom isn’t floating your boat, take this bit of advice from Tyrion Lannister—drunk uncle, imp, and absolute genius. In Game of Thrones, he tells Jon Snow, an illegitimate son who’s never met his mother, “Let me give you some advice, bastard: Never forget what you are. The rest of the world will not. Wear it like armor, and it can never be used to hurt you.”

Tyrion is right, and his words are something that I realized on my own quite a while ago. Words can and do absolutely hurt, but sometimes we can put a stop to that. If people take issue with you for one reason or another, that’s not your problem. It’s there’s.

What really matters is whether or not you’re happy with yourself and what you’ve got going on in your life.  Maybe I’m a freak, but I’m happy.  I have true friends who love me, a guy who’s crazy about me, parents who like to brag about me, siblings who look up to me, and employers who value how hard I work.  Someone will always think there’s something wrong with you; as burlesque queen Dita von Teese said, “You can be the ripest, juiciest peach in the world, and there’s still going to be somebody who hates peaches.” 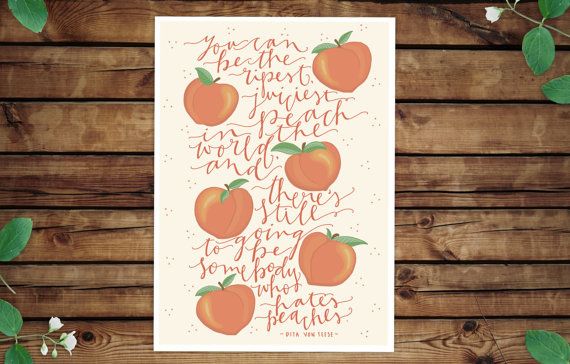 Photo via GabriJoyStudios on Etsy

READ MORE  Words Of Wisdom: The Important Advice Getting Us Through Our Twenties

Find people who don’t call you a freak.  Keep them by your side.  And don’t be your own enemy.  Refer to yourself as a freak if you will, but make like Tyrion and turn it into armor.

A final anecdote: I was 21 and had a dream that I met the singer and guitarist of a particular band and somehow got involved in a three-way. I woke up confused and slightly amused.  A day later I was walking through Charlotte Russe when I saw a black beanie hat with the word “Groupie” embroidered in white. I seized it immediately and laughed out loud, reminded of the bizarre dream I’d had the night before. Those near me stared.

I didn’t care in the least. It was the first time I’d laughed in a while and in that moment, I was totally and utterly me—just a girl with wicked cat eyes and a flair for writing laughing alone in a crowded store.  Moments like those, when I’m totally and unapologetically me, are the happiest of my life.

Let them be yours too, you delightful freak.

READ MORE  I Like the Way You Work It: Words From Successful Businesswomen

Previous Post: « Competition, Envy, And How To Make It Work For You
Next Post: Finding Your Voice In The Workplace »

When Life Doesn’t Give You Lemons

Seize the day, carve your own luck, and build your own success. We all know that it’s easier said than...