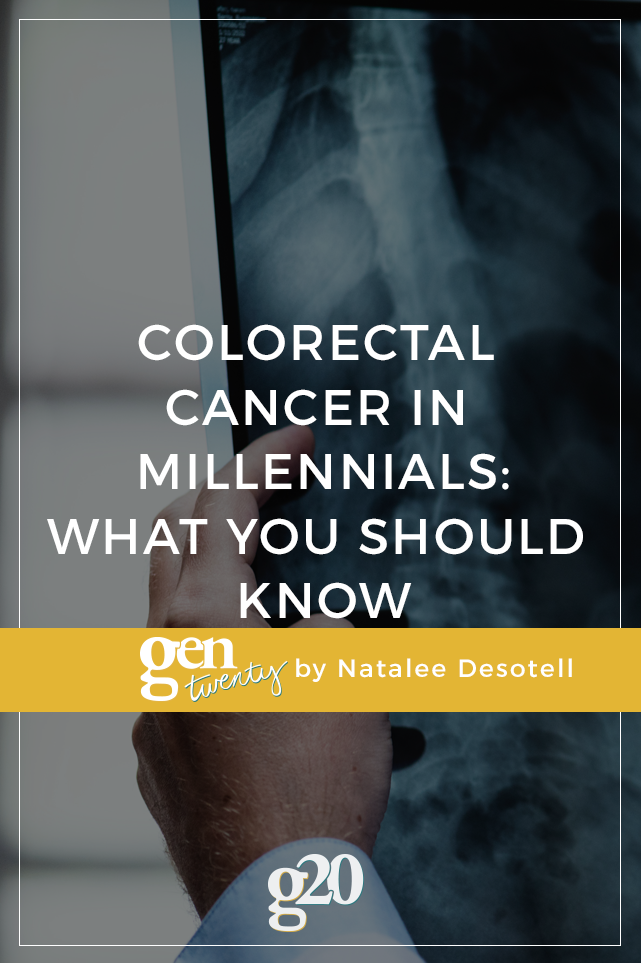 Are you going through life thinking that you have special “taste zones” on your tongue? Do you think chugging a few glasses of Tropicana will prevent you from catching a cold? If so, I regret to inform you that you have been misinformed about your taste topography and your justification for drinking vitamin C packed mimosas. It’s not your fault if this is new information to you; we’re often taught simplified, flawed versions of the truth and we continue to believe them until that view is challenged.

Many scientific “truths” turn out to be false, or at least significantly more nuanced than we are first led to believe.

For example, most assume that older adults are always at higher risk of getting certain cancers and that people under thirty have at least a decade or two before they even have to think about diseases like colorectal cancer. This assumption is bolstered by the current recommendation from the United States Preventive Services Task Force to hold off on colon screening until a patient turns 50 years old. With guidelines like this, it’s no surprise that the colon health of millennials isn’t on every doctor’s radar.

Add to that the fact that colon cancer is relatively uncommon and is on the decline in the general population. About one in 22 men and one in 24 women will be diagnosed with colorectal cancer in their lifetime. The incidence of colon cancer has been declining nearly three percent each year over the past decade and the proportion of cases that are fatal has fallen by about the same amount. In short, scientists are making progress on colorectal cancer prevention and treatment. On the surface, it seems like a disease that we can afford to be a little less worried about than past generations.

While the overall numbers are declining, a curious trend is happening among Millennials and Gen-Xers. Incidence is actually increasing in these populations.

In 2017, a study was released in the Journal of the National Cancer Institute that examined the changing incidence of colon cancer in the United States from 1974 to 2013. More specifically, what they found is that colon cancer incidence increased from 1.4 percent to 2.4 percent per year since the mid-1980’s in people aged 20 to 39. From the late eighties to 2013, the proportion of rectal cancer diagnosed in adults under the age of 55 doubled from about 15 percent to 30 percent.

Scientists have listed many possible explanations for why this is happening. Many believe it’s related to inflammation caused by the high-in-fat, low-in-fiber American diet. It could also be related to our increasingly sedentary, Netflix binge-watching lifestyles or even obesity in general. However, only 10 percent of colon cancer cases were found to be attributable to excess weight in a large study conducted in the United Kingdom. Many years of research are needed before we’ll have a clearer explanation for why we are seeing this trend.

It’s also unclear what it means for future disease burden. Will incidence continue to rise for younger populations like Gen Z (born around 2000), or is this just a temporary uptick? What does it mean for disease prevalence when Millennials and Gen-Xers reach retirement age?

This article is not meant to alarm you. Chances are, you do not and never will have colon cancer. There’s no harm in understanding a few of the symptoms, though; if you do develop colorectal cancer, the prognosis is much better if it’s caught early. Unfortunately, colorectal cancer in people under 50 is typically caught in its later stages because it is simply not on their doctor’s radar.

One sign of colorectal cancer is often blood in your stool. Most commonly, though, blood in stool is caused by hemorrhoids. Check in with your doctor if you develop this symptom. Other symptoms include frequent bloating and gas, frequent constipation or diarrhea, a feeling that your bowel never empties completely, weakness and fatigue, or weight loss.

Having one of or a few of these signs isn’t a reason to go into a panic; they could mean many other things that aren’t cancer. If your symptoms persist for several weeks, though, get in touch with your doctor to rule out anything serious.

Be Your Own Advocate

If you suspect something is amiss, you can use a discrete tracking app like Cara or the not-so-imaginatively named Stool Log, to document some basic details about your BMs. You can use these to either a) prove to yourself that everything is actually fine, or b) show your doctor in case something really seems off.

Despite the fact that nearly one-third of colorectal cancer patients are younger than 55, the recommendation of initial colonoscopy at age 50 persists. If you feel strongly that something is wrong, you may need to be your own advocate with a doctor who still sees colorectal cancer as an older person’s disease. Doctors are human, so they are not immune to holding outdated or incorrect assumptions until those ideas are challenged.

Adulting and Money: How To Manage Your First Salary and Benefits

Now that you've taken a career leap into a new role, it's time to learn how to manage your money.