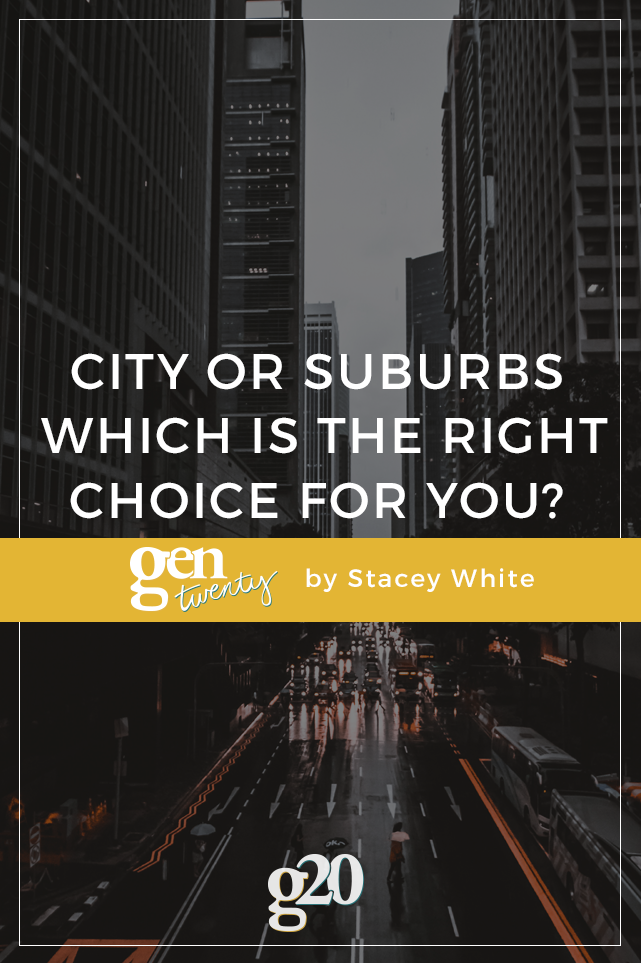 As a twenty-something, you’re in a perfect position to reach out and grab life by the scruff. You’re young, free, and (maybe) single, and the choices you make right now can have a dramatic impact on the rest of your life.

One of those big decisions is where you locate yourself, and something you’ll need to consider is whether to move to a big city or stick to the suburbs.

Traditionally, of course, young people are hugely attracted to city lifestyles. But while many media reports suggest it is the location of choice for millennials, there are equally as many that are saying the ‘burbs are very much in vogue.

The reality is that it is all down to personal choice. The big question is — which is the right place for you?

Here are a few points you’ll need to consider to ensure you are making the right choice:

First of all, the obvious starting point is all about the Benjamins. Living in a city is going to cost you significantly more than a place out in the suburbs — in rental costs at least.

Sure, there are ways of reducing those costs. For example, you could find a room to rent in an apartment or shared house, and spread the enormous cost amongst 3-4 others. It’s a natural progression from your experience in student accommodation, but the chances are it won’t be long until you crave your own space.

But is the suburban lifestyle the answer? We’ll go into travel in a little bit more detail later, but your commute to work is going to cost you when traveling in from the suburbs every day.

And you also have to bear in mind that if you want to go out of an evening, the extra travel costs and reliance on public transport is going to cause you problems, too. That said, if you are seeking a quiet life and don’t mind cycling long distances to and from work, there’s no reason why suburban living can’t work for you.

Money isn’t just to be spent now, of course — it’s also about saving for the future. And if you are forking out a third — or even more – of your income on renting an expensive place in the city, you’ll find it incredibly hard to put aside money for a rainy day, a deposit on a house, or even contribute to a retirement fund.

It’s one of the primary reasons why so many millennials get a little trapped in large cities. They pay so much money towards rental and living expenses that it is almost impossible to afford to move on elsewhere.

Living in the suburbs has the slight edge when it comes to savings, as you’ll find there are fewer distractions, living costs are less, and of course you will be paying lower rental. If you intend to build a solid economic foothold, suburban life might be a wise choice for now, unless you are on a fantastic salary.

There’s no question about it – if you crave a large living space, you’ll need to go to the suburbs. Unless you are earning an excellent wage, renting or buying a large city-based property is going to be out of your reach — for now, at least.

For the price of a tiny, one-bed apartment in the city, you could have a two- or three-bed house in the ‘burbs. That gives you more room for entertaining, having people over, and you can actually feel relaxed at home rather than craving going out to escape the tiny surrounds of a city apartment.

Living in a city has a huge advantage over the suburbs regarding travel. Literally, everything you need is almost guaranteed to be on your doorstep.

Your place of work will be close, as will local stores, restaurants, and bars. Public transport will run pretty much all the time, and when you want to get out of town, a bus or train will get you to another major city far quicker than driving yourself. In short, there’s not even a need to have a car — which is a significant saving regarding your finances.

Life in the suburbs could be very, very different. There are no guarantees when it comes to facilities, and the whole area could be closed by mid-late evening. You will have to drive almost everywhere or take the bus (when it’s actually in service).

And if you have a spontaneous desire to go out and meet up with friends, the chances are there won’t be much choice unless you call an expensive cab.

That said, there are reports of a few suburban areas becoming hotbeds of millennial activity, as many young people move out of the city for financial reasons. Keep an eye out for places like these in your area, although bear in mind that as they get more popular, the rents are likely to rise, too.

As a twenty-something, you might still feel like you are years away from having a family or just looking for a quieter life, but believe us, that time will arrive a lot sooner than you think. You have to have one eye on the future from the second you leave home. It’s worth bearing in mind that many young people grow tired of the hustle and bustle of city life, as well as the cost.

However, the reality is that if you ask most young city dwellers about their experiences, they’ll pretty much all tell you the same thing: they love it!

Not only is there a lot to do, but if you can prove yourself by working in a big city, you’ll get the paycheck to prove it. Cities are where the high-paying jobs are, and once you are on a good salary, it’s rare to go backwards and take a cut — even if you eventually move to the suburbs to raise a family.

As you can see, city life isn’t for everyone and it comes down to personal choice. Make sure you think it out before making the right decision for you!

If an informational interview were a shape, it would be an amorphous blob. It's tricky because it can be anything...